FULLERTON – The founders of an online startup hope to foster a culture of giving, $7 at a time.

With the number “7” permeating virtually every element of their marketing plan, Aaron Chavez, 19, and Dale Partridge, 26, named their business Sevenly.

The 12-person company – with no employee older than 30 – sells trendy, intricately designed T-shirts and hoodies with inscribed messages aimed at raising awareness for what they say are seven of the world’s greatest causes: combating human trafficking; hunger; disasters; poverty; a lack of water; and helping with medical and general aid.

Every Monday morning, Sevenly.org introduces a T-shirt and hoodie, emblazoned with a new design and message, targeting a new charity.

They stay on sale for exactly seven days, with Sevenly donating $7 from each sale to that charity.

The clothes can only be purchased from Sevenly.org, and once the weeklong campaign is finished, that design is retired.

The next design and accompanying charity is kept secret until the day it is launched.

“A big component of our shirts is to make them conversation starters,” said Chavez, who dropped out of junior college and emphasizes social-networking. “I get asked so many times what the shirts mean.”

Since starting in June, Sevenly has partnered with 34 charities and donated more than $225,000, the founders said.

Every campaign has either met or exceed sales projections, Partridge said.

In its first week, Sevenly sold 863 items and raised $6,125 for the International Justice Mission, a nonprofit organization that combats human trafficking.

“Our mission is to lead a generation towards generosity,” said Partridge, who has owned a rock-climbing gym and an advertising agency.

“Selling T-shirts and hoodies is really just the means,” he said. “If we can help people give, we can get them to care.”

Other nonprofit groups that have partnered with Sevenly include Souls4souls, which donates new footwear to the needy; Living Water International (provides clean water to impoverished areas); and the Somaly Mam Foundation (combats human trafficking).

The T-shirts and hoodies are manufactured in “sweat shop free” facilities in China, Peru, or Nicaragua, Partridge said, and then sent to  a the company’s screen printer in Ontario.

The printed items then get shipped from Ontario to the customers.

A visitor to Sevenly.org can order a shirt Monday and receive it by Thursday, at the latest, Partridge said. The shirt or hoodie is quickly printed and shipped.

After meeting and becoming friends through a social-networking website, Partridge and Chavez began tossing around ideas on business plans that would raise awareness for poverty. They studied companies that incorporate charity into their business, such as Crochet Kids and Tom’s Shoes

But unlike those companies, which contribute to specific causes, Partridge wanted to “attack multiple issues across the globe.” So the pair invested $60,000 to start the business, which they opened in Corona before relocating to Fullerton in January.

The pair, who both live in Corona, homed in on Fullerton because “it is a college town” Partridge said.

The Sevenly office, unassuming from the outside, is off Harbor Boulevard and just steps from Fullerton’s Downtown Plaza

“It made sense,” Partridge said of the move. “It’s got a good downtown feel. … It just feels like a good spot.”

Before Chavez and Partridge take on a new cause, the charity must agree that the money raised will go to its cause, not to fund operating costs.

Social networking is a driving force for both Sevenly and the charities it helps, the founders say, with many of the charities getting a boost by providing links to Sevenly’s website.

“It’s like running a presidential campaign,” Partridge said. “Every week is intense.” 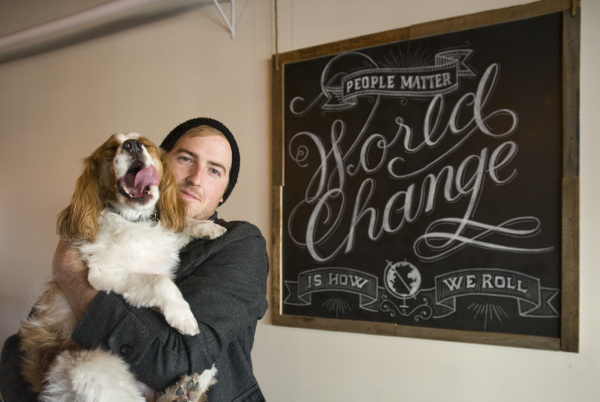